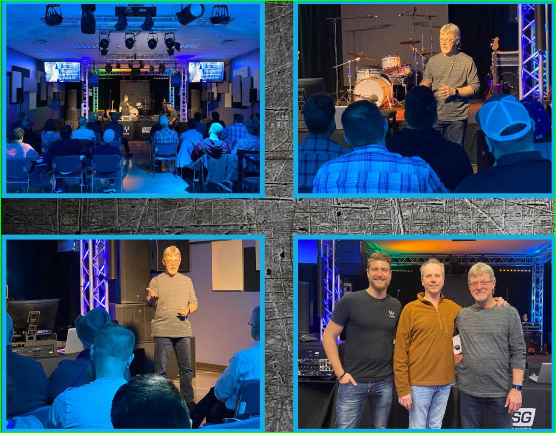 Several weeks ago, I attended an audio seminar at the home of Sound Productions here in Dallas. Wow! What special seminar, led by the very talented FOH engineer Buford Jones. Buford stellar carrier of 40 + plus years as a veteran live sound mixer, sound engineer and guitarist with the likes of Led Zeppelin, David Bowie, Linda Ronstadt, Pink Floyd, ZZTop, Eric Clapton, James Taylor, New Bohemians, Jackson Browne, Don Henley, Clint Black, Faith Hill.  Buford shared his technical skills via situational stories that demonstrated his ability to communicate to the artist. I absorbed every word. It as a delightful session.    The session began with an overview of the Soundgrid System from WAVES including the e-Motion LV1 live mixer.  In many ways the Soundgrid system was my first introduction into digital mixing combined with plug-ins.

Thanks to Sound Productions, WAVES and to Buford Jones.  I really appreciate you.  What to learn more? Check out the links below.

SB 785 passed this week in the Senate and includes programs for post-traumatic growth, access to alternative therapies,

Contact-tracing are emerging in a variety of formats and deployments and study says adoption will only continue to grow.

No matter how much the economic situation changes, prompt detection and response to cyber threats must remain a core pri

Execs at TikTok, Microsoft and more offer their opinions on a range of cybersecurity topics during video discussion
24 September 2020

An article with tips for creating huge sounding mixes. The post How to Make Your Mixes Sound Gigantic appeared first on

An article on things people often believe make a great mix, but don't. The post 5 Things You Believe Make a Great M

The new instruments are still the mkII versions of these instruments, but both have been updated with a new look and fac

"It's not a synth made for the cost conscious, but I also don't feel that it is overpriced," notes B

While the 'Cassette Synthesizer' is monophonic, it lets you turn any drone into a melodic instrument.… Read Mo

Tone Science Module No.4 brings together tracks from synthesists with a variety of backgrounds.… Read More New Album, ‘T

Sorry, no Tweets were found.